A wintry poem and my love for Pennsylvania 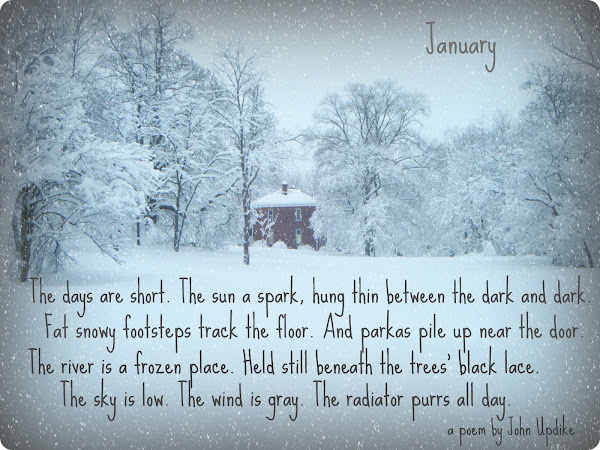 This photo was taken by me in our field behind our house just after a big snowfall.
The house in this photo is actually our neighbor's.
It's very old and very beautiful, built with crimson red brick.
The tiny little snowflakes and poem were added using Picnik.com, a free photo editing program that I use for most of my photos.
I don't have Photoshop, so it comes in handy.

I love this poem, January...by John Updike!
It precisely captures the cold, grey wintry days of January in Pennsylvania.
John Updike grew up in Pennsylvania..and that is why I love his poetry..I can appreciate his descriptions about the months of the year because I've lived it.
It's my life.

I know that winters in my state can be long..and cold..and grey..but there's something about Pennsylvania that I just dearly love.

Pennsylvania is good, Pennsylvania is life, it's earthy, it's farms and farmers, dairy cows and corn fields, it's rolling acres, mountains and valleys, it's family and friends, it's school yards and churches, it's deer and wild turkeys, groundhogs and squirrels, it's pheasant and duck and raccoons and possum, it's fishing and hunting and skiing and camping, it's 4 seasons..winter, spring, summer and fall, it's icicles and snow, it's daffodils and crocuses, it's Sunrise service on Easter morning, it's green grass and swimming in the lake, fireworks and picnics, it's heat and rain and high humidity, it's garden grown corn, fresh picked tomatoes still warm from the sun, it's pumpkins, gourds, and trick or treat, it's giant orange harvest moons, it's ponds and lakes and creeks and dams, it's state parks and county fairgrounds, it's parades and festivals of every ethnic background, it's blue collar workers and mom and pop corner stores, it's libraries and fire halls, weddings and funerals, it's Boy Scouts and Girl Scouts, World War II veterans and new recruits too, it's meatloaf and mashed potatoes, homemade bread and fruit pies, it's maple syrup and wildflower honey, it's pine trees and oaks...it's Pennsylvania, home to good folks. Pennsylvania is good, Pennsylvania is life!

Ok, that there was written by me...just now, off the top of my head, not pre-planned, just from my heart and my soul. Now you know just a little bit about what makes Pennsylvania a special place. Even now as I write, there's so much more that's coming to my mind...but I'll leave it at that.

That's me in the photo below...enjoying the snow. Have you ever fallen back into a foot or more of snow? It's quite comfortable. 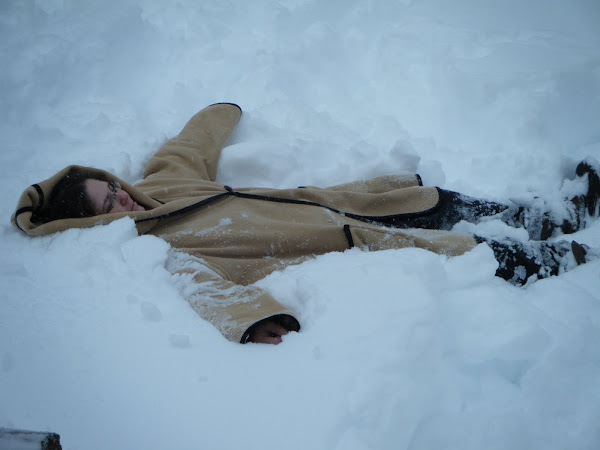