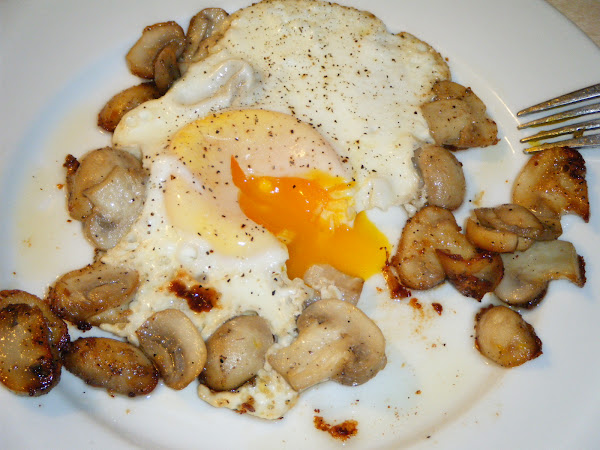 This is currently my favorite breakfast.

It's quick and easy to make.

Here' what ya do.

Saute some sliced mushrooms in melted butter or margarine. I use margarine because it won't burn so doggone fast.

Crack one egg over top of the mushrooms...right in the same pan. 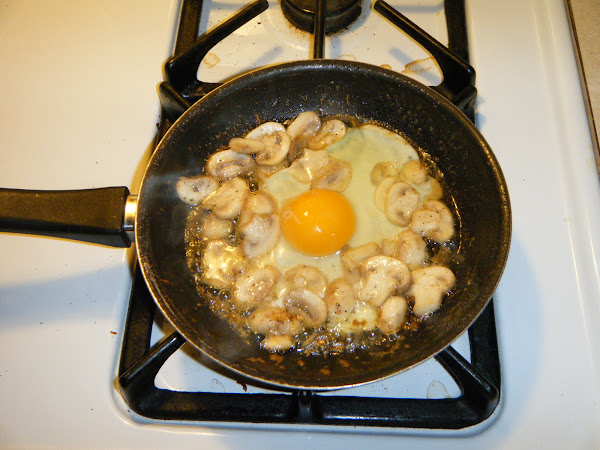 Cook on low heat until egg whites are cooked...then cover egg to cook yolk to your liking. I like my yolk thick and just a little bit runny. 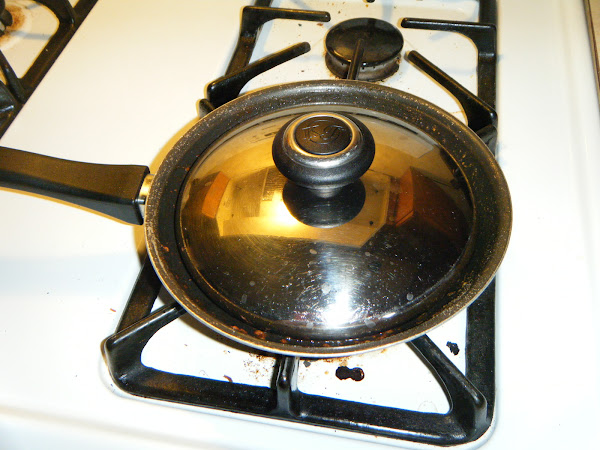 Slide the whole thing onto a plate. 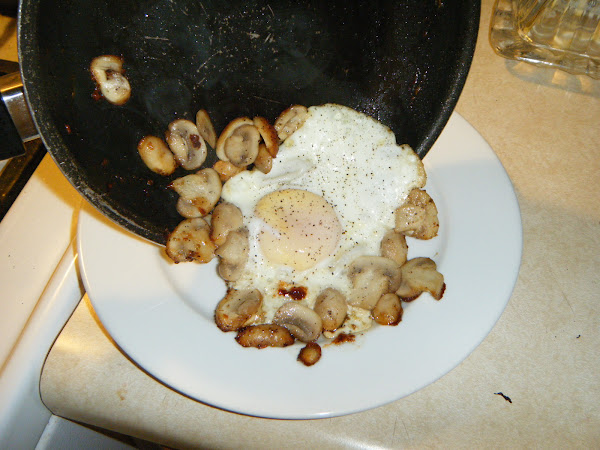 Sprinkle with salt and pepper! 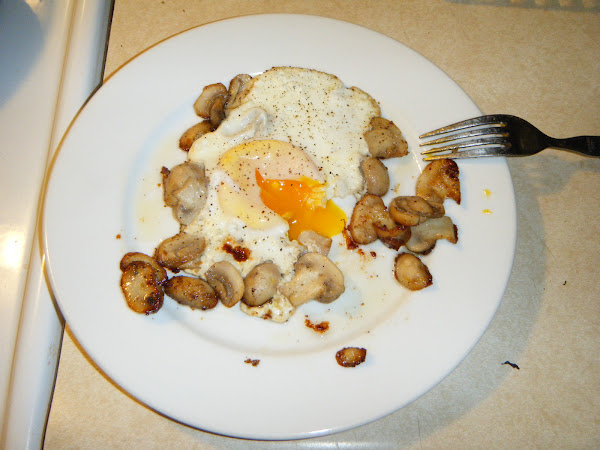 Labels: what about cooking 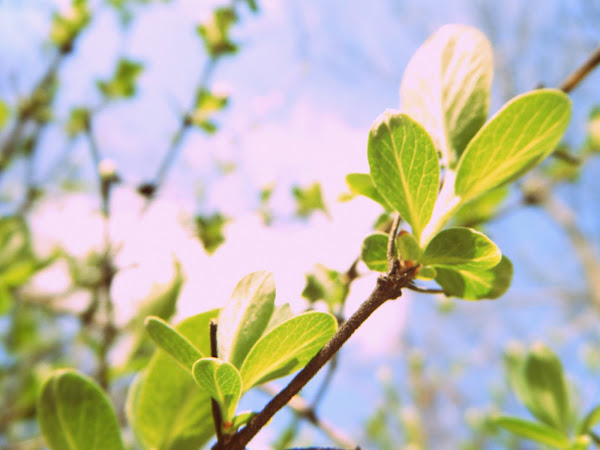 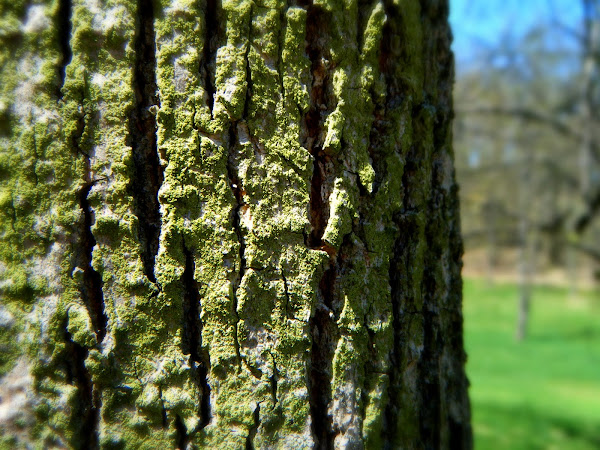 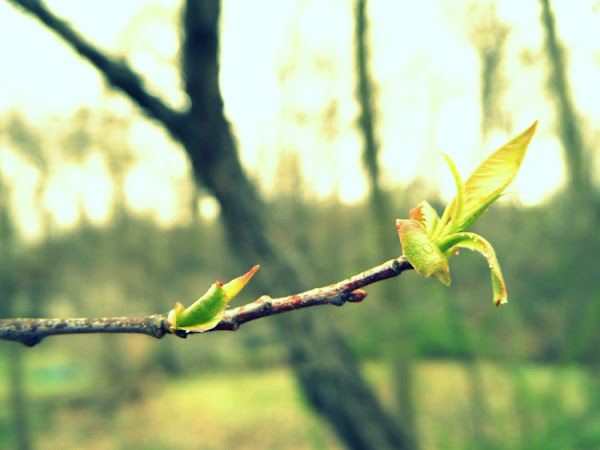 Green has begun...and I am me again.

Bye, bye old man Winter...you have worn out your welcome.

Labels: what about photos

daffodils in my dining room

It rained all day today.

In between the showers 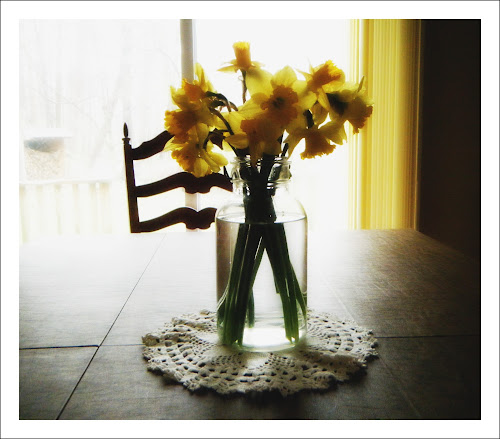 in an antique canning jar

their faint but sweet fragrance.

I closed my eyes

Labels: what about photos

Oh, zee time fliez when joo are having fun. I'm not sure what kind of accent that was...I think it was French. Hee Hee. It's been a week since I last posted. I wanted to share with you, what I had for breakfast this morning. 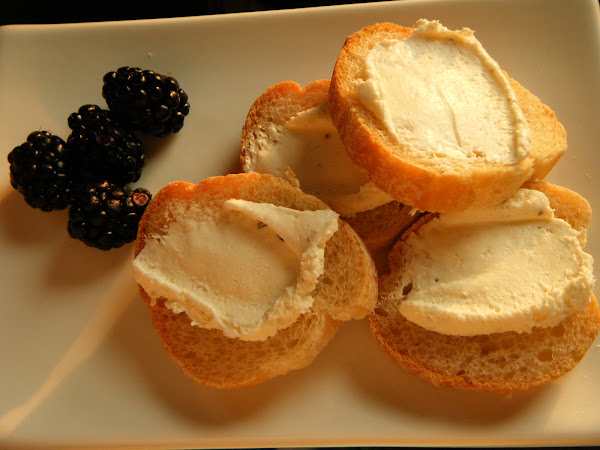 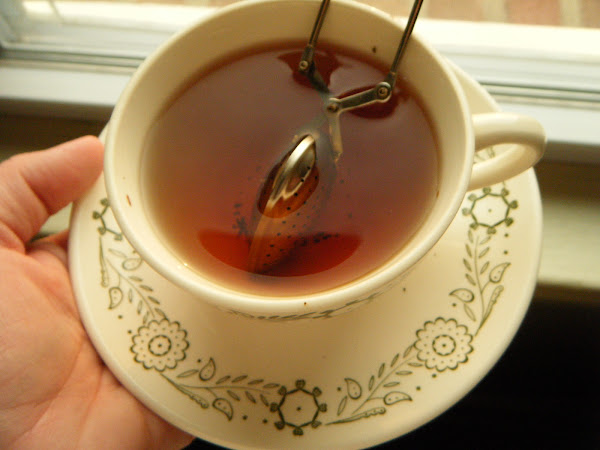 With the warm glow of sun coming through my window this morning, the blackberries tasted all the more sweeter. The honey was perfect..unbelievably delicious.. 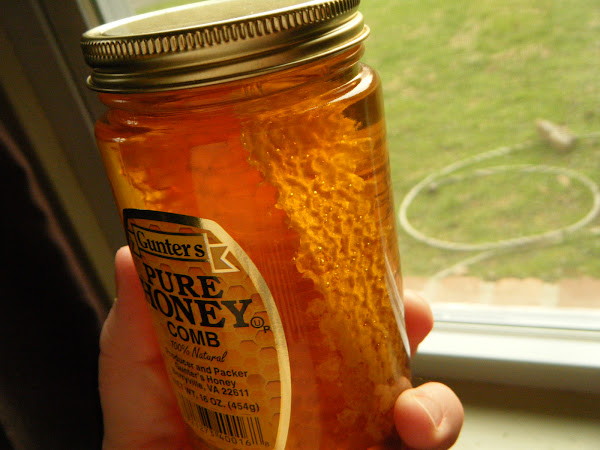 ..the first drizzle from a new jar with the honey comb inside..and..the blackberry sage tea was mild and smooth and pleasant.

Labels: what about food 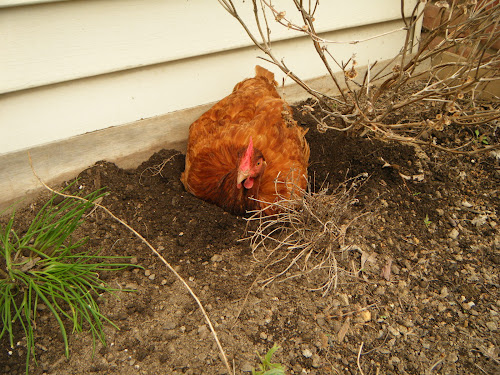 Chickens like to take "dust baths". Over the weekend, the weather was warm and beautiful. It was actually 80 degrees. Our hens decided it was time for a bath...in my herb box. 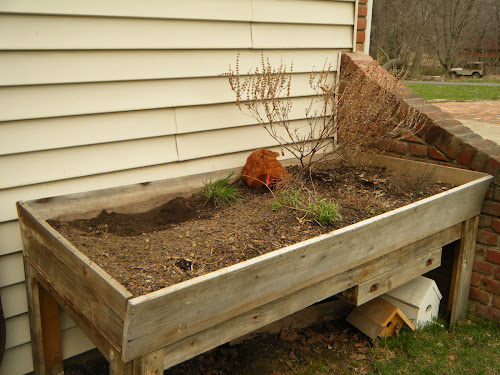 I haven't got around to cleaning up my herb box for the season yet, and the hens were more than happen to get in there and turn over the soil for me. My husband found them in there twice and chased them away both times. 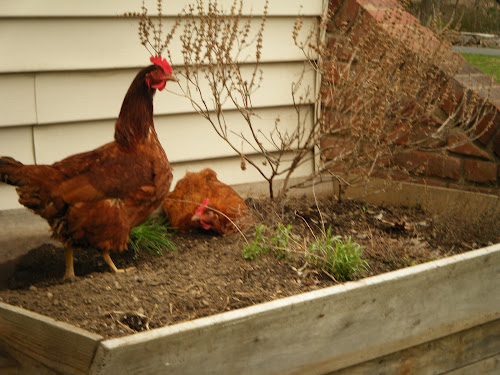 I found them in there once myself...of course, I ran to get my camera before chasing them off. 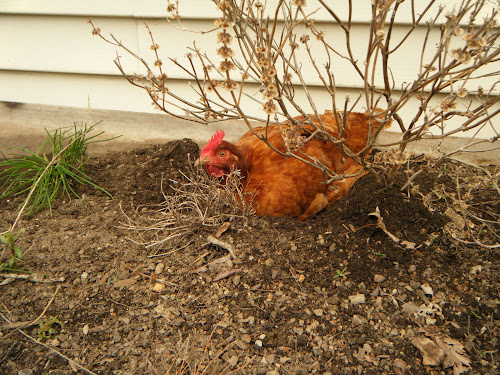 They were probably thinking, "ok, what's up with this lady, first she takes a photo cause we're so cute..and then she chases us away." 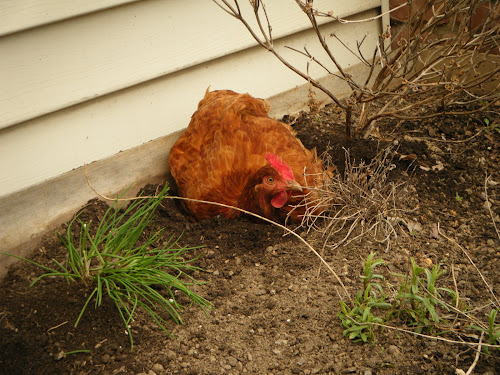 After I chased the chickens away, I got out my little spade and fork and turned over the soil and added a fresh bag of potting soil. 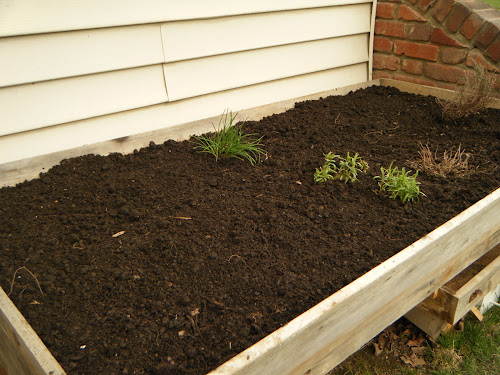 Three of my herbs actually grew back from last year and are already sprouting leaves: tarragon, chives, oregano and thyme. I'll be adding basil, parsley, cilantro and dill...also another couple of thyme plants. I've noticed that I use thyme a lot and I ran out of thyme in November. Ugh. Can't let that happen again.

By the way, here is what my herb box looked like in all it's glory last summer. I even grew a little lettuce in there as well. It's just quicker and easier for me to pick it for lunch and dinner when it's right close to the house. I can't wait until it looks like this again. 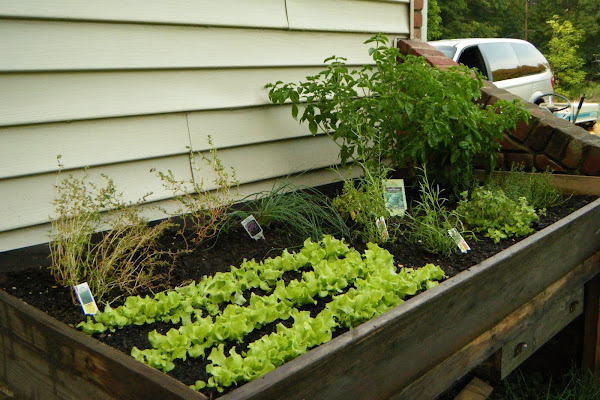 P.S. Even after I made my herb box beautiful and ready for planting, on Monday afternoon, I found our white Americauna bathing. Well, she hates it when she's spotted bathing. I am not kidding. She hopped up so fast, squawed and bawked and jumped out of my herb box. Her feathers were covered in black soil. As she ran away shaking out the dirt and sqwaking at me, I told her "no, I am not going to apologize, your on my turf baby." Ahhhhhh, chickens are so funny!
Posted by Bonnie 5 comments:

Labels: what about chickens 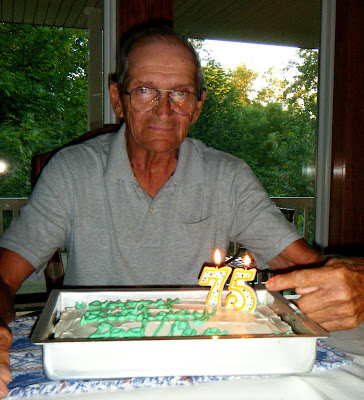 This is the final post of my father's story. I'll wrap it up by giving you the basic points that I wanted to convey about my Dad and some of the reasons why I love and respect him so much. Basically, what I wanted to share is that he came from nothing...and yet he rose above it and prevailed. He was a successful contractor for 40 years, owned his own business since he was a young man, got married, is still married to the same woman for over 50 years, had six children, raised us right, excelled in most everything he did, received trophies for competition for figure skating (roller skating), trophies for competition in flying model airplanes, and many trophies for competition for racing snowmobiles on water (yes...on water...you strip the snowmobile down to bare bones and basically ride across the water...known as watercross) He is a success. He has enjoyed many hobbies including model trains, model airplanes, dirt bikes, snowmobiling, fishing, water skiing, and scuba diving. 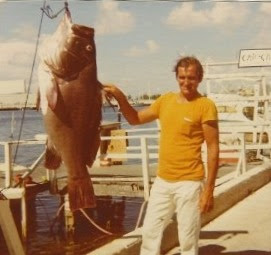 Also, I want to say that my father can build anything. He spent a lifetime building room additions and remodeling for people...everything from roofs to patios, decks, garages. He does electrical, plumbing...you name it..everything has been self taught.

Of course my father is not perfect, I don't claim him to be, nor would he claim himself to be. Doesn't matter though, I have learned so much from him. What's amazing to me is his advice has always been "spot on". I feel like I can hear him in my head saying "you don't do that, that's not right" or "that's what you do, it's the right thing"

1) If you can't pay cash for it, then you don't buy it.
2) You don't go into a bar, you go into a bar, you're looking for trouble.
3) You don't ever pick up a gun, you pick up a gun, you better be prepared to use it.
4) Don't ever loan anyone money, you give it to them. If you can't afford to give it to them, then you don't do it.
5) You got homework? (I would tell my Dad "no") You got straight A's? (I would then say "no") Then you got homework.
6) The party's over. (That could pertain to many things..playing music too loud, bad grades, friends are over and it's late and past the time they should be there, haven't been doing chores like you should...and so on and so on)
7) Whatever you need or whatever you want, tell me, I'll buy it for you, but you don't get an allowance. You get an allowance, then you buy things you shouldn't be buying...cigarettes, booze. (he says this as a generalization, not meaning that I was doing that, just meaning that teenagers can do things they shouldn't do..and he's right)
8) Once you're out, you're out. (That means, once you move out, that's it, you're out, you don't come back, you make it, there's no other option, you can do it, you're grown, you do it...and I have to say, all 6 of us kids heard that since we were little, it was understood, it didn't bother us, we grew up, some went to college, one went to military, couple of us moved out and starting working, whatever, but not a one of us ever had to move back home because we couldn't make it on our own. Also, I might add, my father has always generously helped every one of us with money whenever we really needed it to pay bills, or a down payment for a house, whatever it was. He is very helpful and very generous and jumps at the chance to go to any of our houses to help remodel, reconstruct, new bathroom, new kitchen, new floor, vinyl siding etc. For the kids that went to college, he paid for college 100%, for the kids that didn't go to college, he bought them a brand new car 100% paid for. But.....Once you're out, you're out. It's simple. It it's not mean, I think it's a good thing. It really never was a question for us kids. You grew up, you moved out, you did what you did, and you made it...sometimes with a little help from Dad!
9) That's a bunch of happy horse shit. (That means something is not the way it seems, or blown out of proportion, or basically, a bunch of baloney! )
10) You do a good job because you are supposed to do a good job, not so you can get a pat on the back.

Really, he has lived a pretty good, full life. These days, he has slowed down. He has gone snowmobiling in Montana in recent years past...just not riding hundreds of miles a day..no cannot do that anymore...he has a bad back and has had both hips replace, has arthritis and osteoporosis.

Now he spends his time tinkering with Lionel trains and building and flying model airplanes. He bakes chocolate chip cookies and cakes as well as roast beef and a few other choice meals. My Mom has stopped cooking...I think she has had her fill.

And so, that's my Dad. He is retired now and lives in the country with my Mom. I invite them to my house for Thanksgiving dinner and Easter dinner. My Dad comes to visit now and then in between the holidays. He's trying to get my boys interested in flying model airplanes. 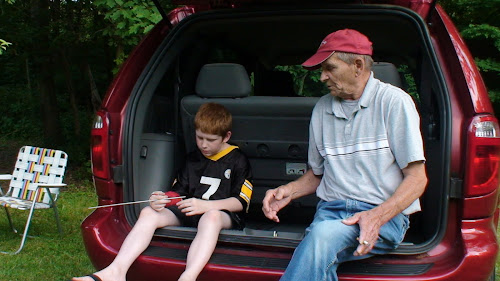 Thanks Dad, you've been a good Dad. I would not trade you for all the chocolate in the world. I'm glad God gave me you to be my Dad.
Posted by Bonnie 8 comments: