Feeling the health of eating a rainbow! 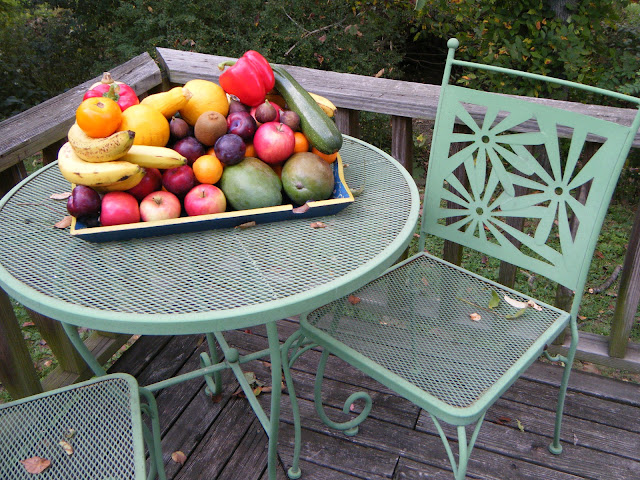 It's Monday morning and I am happy! Not because it's Monday...I'm just happy! My mood has been so good lately. I feel like I've gotten my old spunky self back. Also, the cooler weather is down right exhilarating! I actually WANT to take brisk walks for exercise again! You know....summer is beautiful and all, but me and heat just don't get along these days! Even more so, humidity and I are down right enemies! 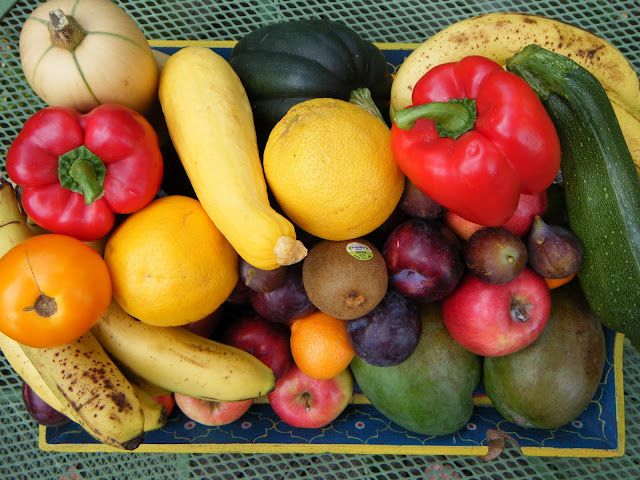 So anyhow....why is my mood so freakin' fantastic???? The past 2 weeks, I've been eating extremely well...mostly raw fruits and raw vegetables. I've had meat only about 4 times: chicken burgers twice, pork roast, BBQ pulled pork, and chicken....ok, that's 5 times. Ya, basically, I'm only shopping in the produce section and at fruit markets. It's been fun though!! 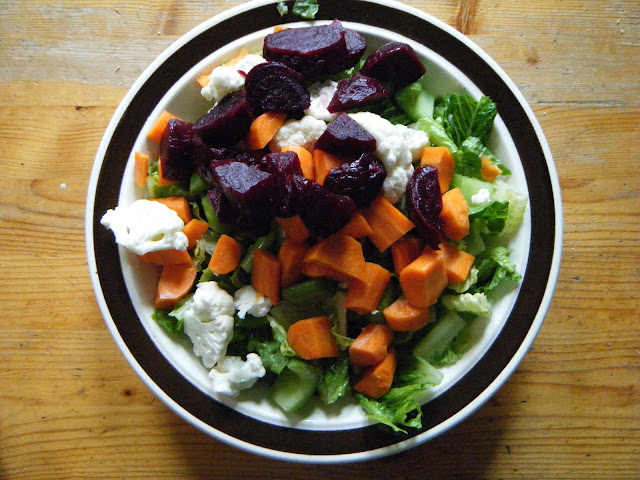 The variety of foods I've been eating is a blast....and it's all so delicious it's not even funny! My energy and mental clarity is fantastic. Oh, I almost forgot...no dairy and no breads the past 2 weeks either. I have had a few multi grain wraps though. The only dairy I've had is the half n half in my morning coffee...{as well as 3 tsp. sugar.} 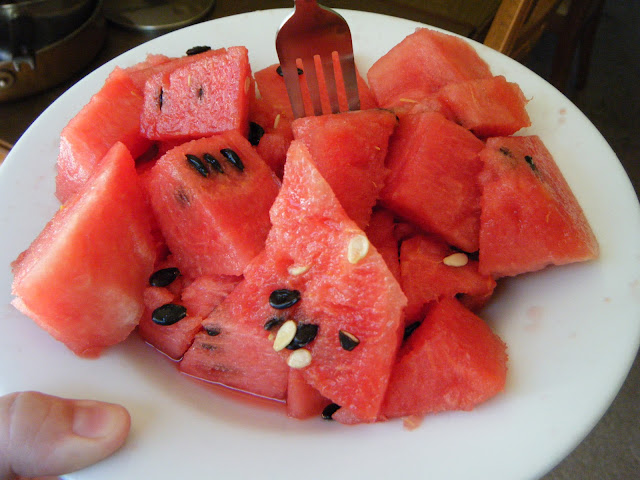 The differences I have noticed these past 2 weeks have been pretty cool! For instance, the very first thing I noticed was on day 4 of eating like this. When I walked down the steps first thing in the morning......there was no pain in my hips, knees, ankles and feet. That in itself is pretty amazing! The crazy thing is, I never ever expected that. It just happened and I noticed it right away. I am telling you the truth people, for years...like the last 4 years at least....every single solitary morning, without fail, when I would walk down the steps first thing in the morning, it was painful and I would hold on the sides of the wall to kinda brace myself...and I would sorta ease myself down the steps. 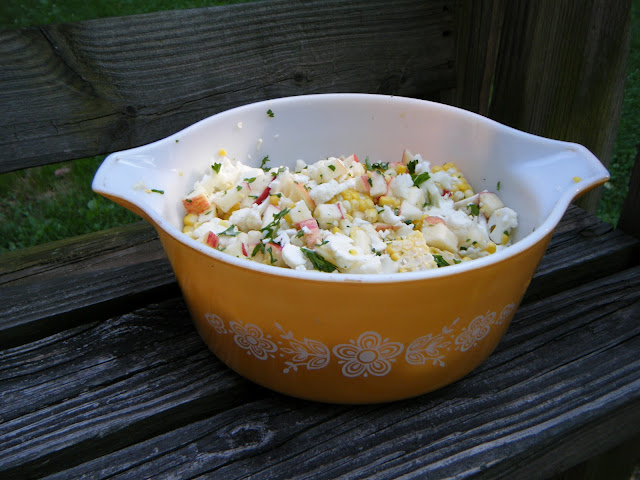 In my mind, it was 100% due to my weight. I am 5 ft. 3 inches tall and I weigh right around 200 pounds. I know extra weight is very hard on knees and feet...so I figured I would be in pain until I lost about 30 pounds...something like that...something that would make a significant difference to the weight load on my joints.  Well......amazingly.....by day 4 of eating 95% of my daily food as raw fruits and vegetables....I may have lost about 3 pounds maybe, maybe 2 pounds.....whatever...but I don't think losing  a few pounds would be enough to take away pain from the waist down in my joints. Sooooo, the only thing I can attribute that to is the surplus of natural nutrient intake from the fruits and veggies that I've been feeding my body. 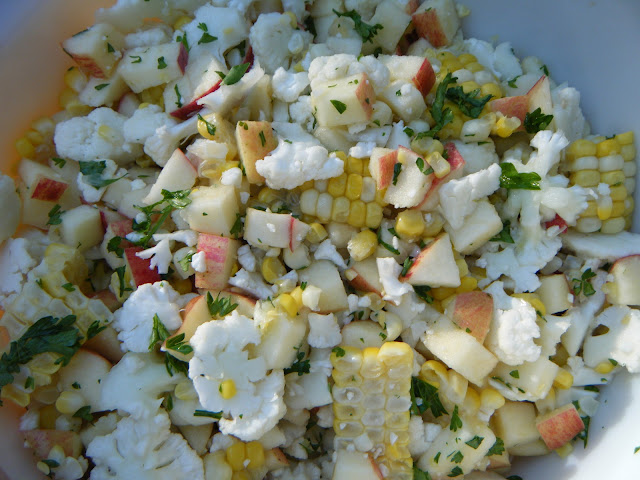 It's been 2 weeks since I started eating like this and the pain has not come back! Very, very crazy!! I also used to experience that same pain after sitting on the couch for a long time at night....I'd get up and go to walk to the kitchen and I would literally hobble!!  Seriously, the hubs and I would joke about it. This has been going on for longer than 4 years...it's just I'm going by how long we've been in this house....we've been here for 4 years. By the way, I have lost a little weight during these past 2 weeks....don't know how much, I don't own a scale, and I don't care....scales will get me into trouble anyhow!!!!...it's not important what the scale says, it's important if my clothes are getting loose and too big. I haven't gone down a size yet...but the clothes are feeling a loose and that is great!! 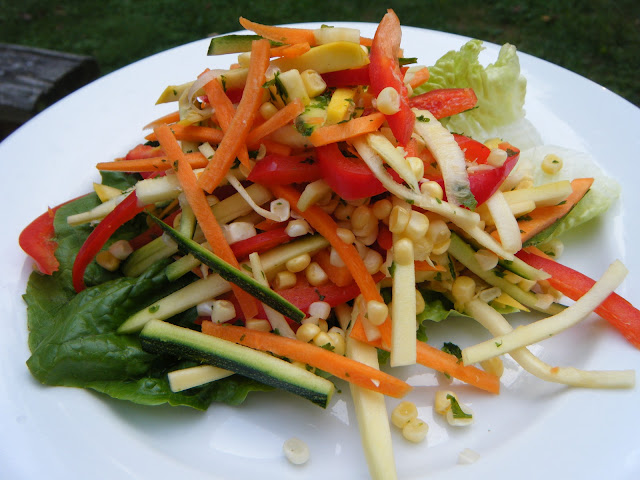 The main reason for me eating this way is to be as healthy as I can and to try to eliminate and or prevent disease.....losing weight is just a nice,wonderful, awesome bonus! Of course I want and really, really need to lose weight...but that will happen if I'm eating clean. The nice thing about this so far is the digestion....it's fast.....not sluggish. Also, I have no feeling of lethargy. I can't tell you how many naps {prior to the past 2 weeks} I have taken on the couch, mid-day, after the kids get home from school....like maybe a 1 hour nap...because I felt so sleepy and blah. I don't feel sleepy anymore...I don't feel blah anymore. Bonus! 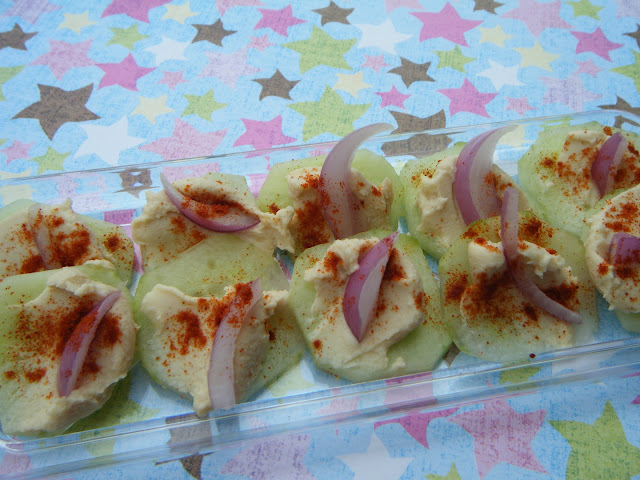 One last note here...when I go up the steps, I am not out of breath anymore...when I walk up my driveway, I am not out of breath anymore. I mean, not like I was gasping for breath before....but it would make me feel a little winded and yucky...now I'm straight up and bam...that's it, no ill effects...no racing heart, no heavy breathing. Pretty cool. 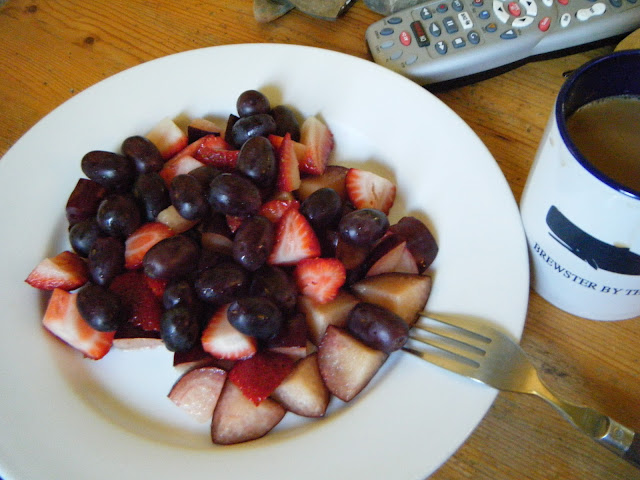 The above photo there is the breakfast I just ate while typing this. As you can see, I'm still drinking coffee in the morning. Like I said, still using half n half and sugar. That is the only sugar I eat all day though...other than the natural sugar I get in fruits. One more thing I wanted to say in case anyone is curious. I have no restrictions on eating. I eat meals at the normal times...I eat again if I am hungry...and I eat whatever fruit or veggie I feel like at that moment. It does seem that I eat the majority of fruit in the morning and then lots of greens and veggies the second half of the day. Not that I won't eat an apple or watermelon as an evening snack...I'm just saying that's mostly how I've been doing it. It's kinda like...whatever I'm attracted to during that part of the day. I have also been eating 2 eggs some mornings when I feel like I am craving them. Also, in the evenings sometimes, I will have some organic blue corn tortilla chips. That's it people. So far so good!
Posted by Bonnie 16 comments: