Summer Activities with the kids, Episode 1, How to play Trash Can, a card game 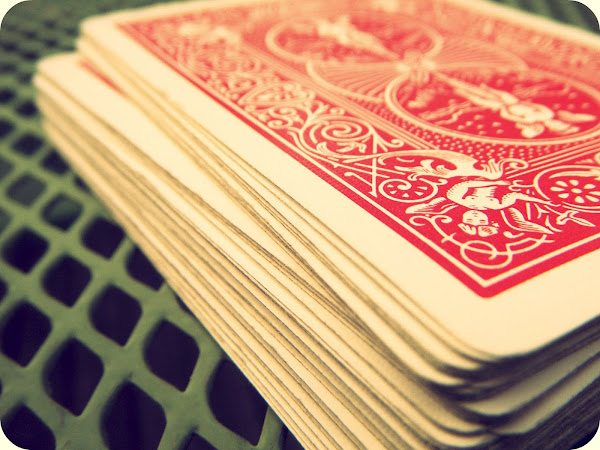 Recently, my youngest son taught me how to play a card game called Trash Can. I pretty much fell in love with this game, because it is easy, requires no deep thinking or massive brain power, and it's fast moving.

Here's the object of the game: Be the first person to fill in Ace through 8 {Aces are considered 1} in consecutive order, in the spaces of the face down cards in front of you. You accomplish this by drawing cards or using opponents discarded cards.
~ ~ ~ ~ ~ ~ ~ ~ ~

First deal the cards out, just as you see below, placing the remaining cards in a stack off to the side. 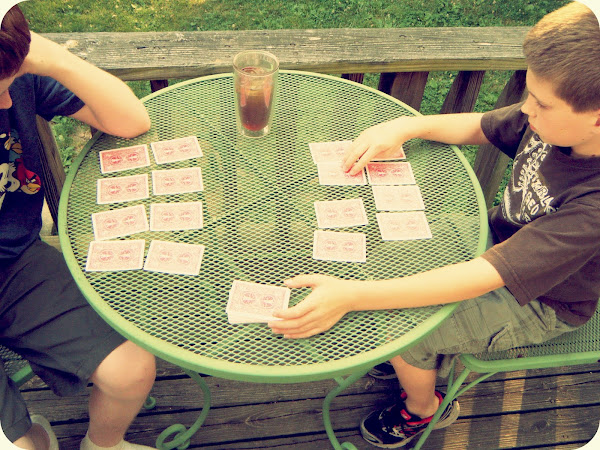 Think of  your cards as numbered in consecutive spots of 1 through 8.
{In this game, you will use Aces for 1's.} 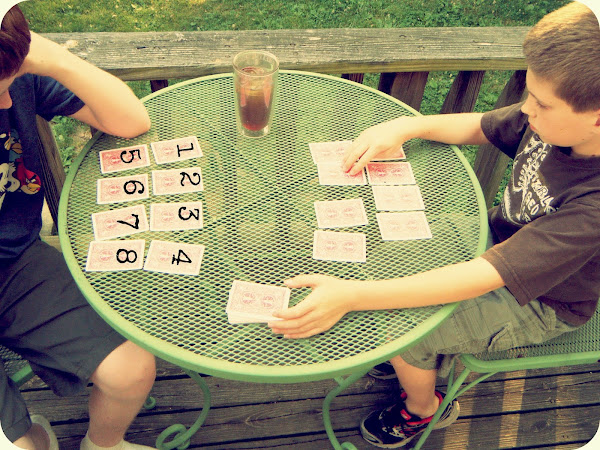 The first player draws a card from the deck of remaining cards. He draws a 9, which cannot be used. He puts the 9 card in the discard pile. His turn is now over. What the player is hoping to draw is cards numbered Ace through 8 so he can fill in the appropriate spots in his set of cards in front of him. 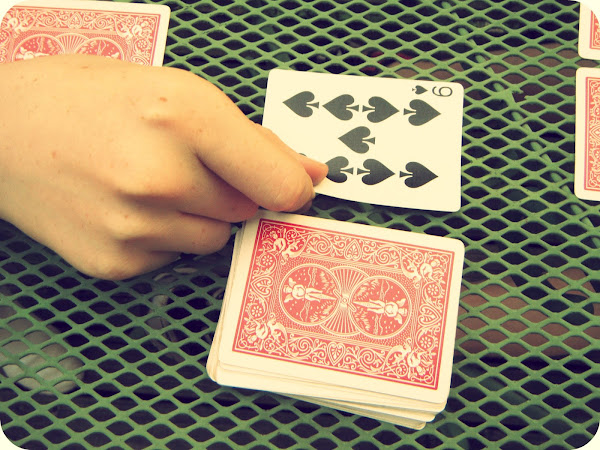 Player #2 decides if he can use the discarded card, or to draw a new card. The top card on the discard pile can be used by the next player if possible. If not, he must draw a card.  He draws a King. 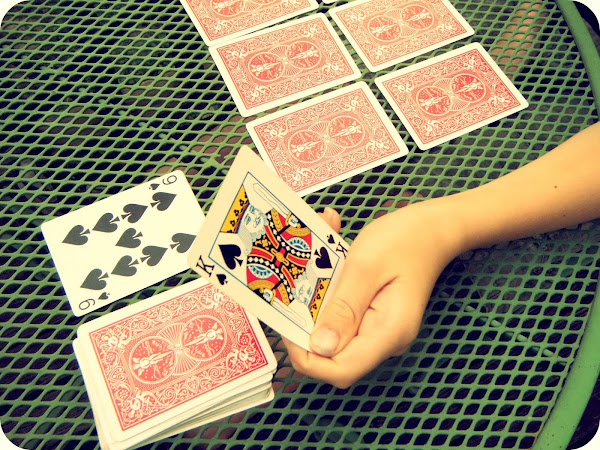 The king is a wild card and can be placed anywhere the player chooses. 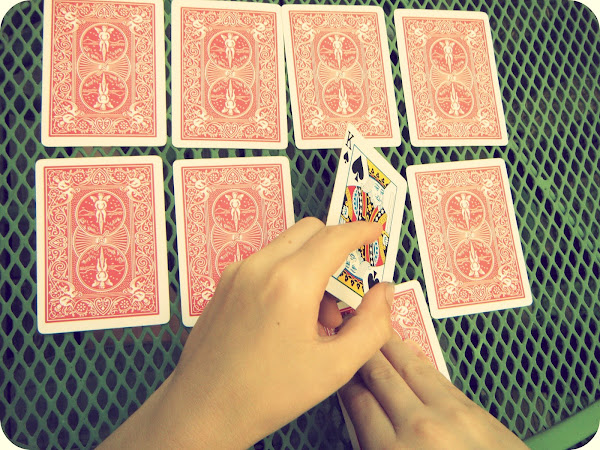 In it's place, the face down card is now revealed. An 8 card. 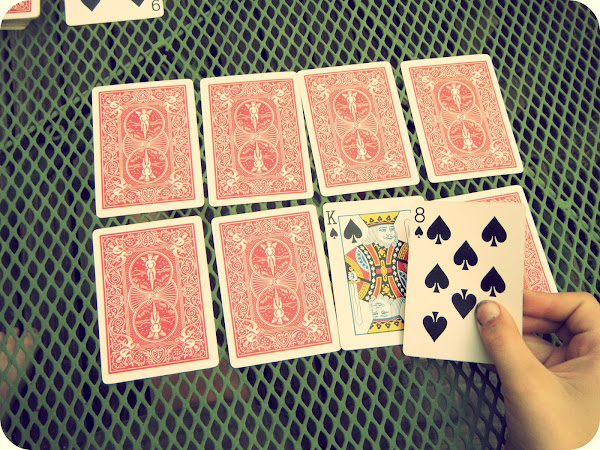 The player can use the 8 card in the 8th spot...now revealing the face down card in it's spot...a Jack. 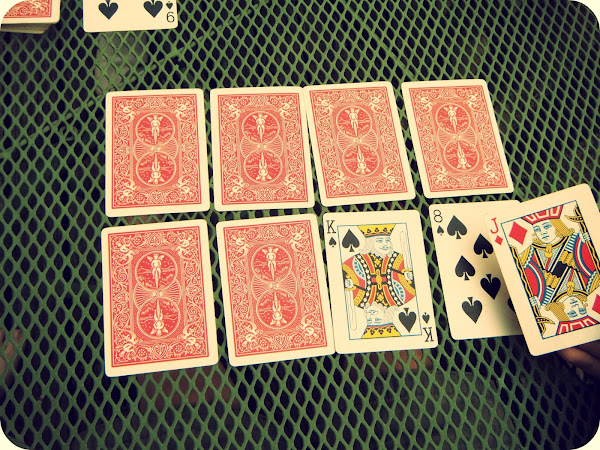 The Jack is discarded since it cannot be used. His turn is now over because there is nothing more he can do. 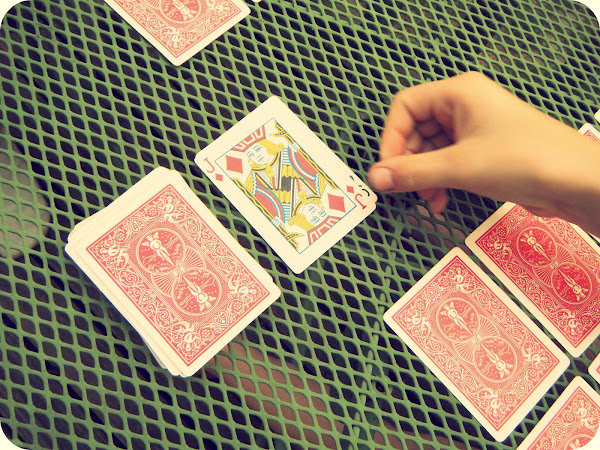 Back to Player #1, he draws a new card since Jack cannot be used. 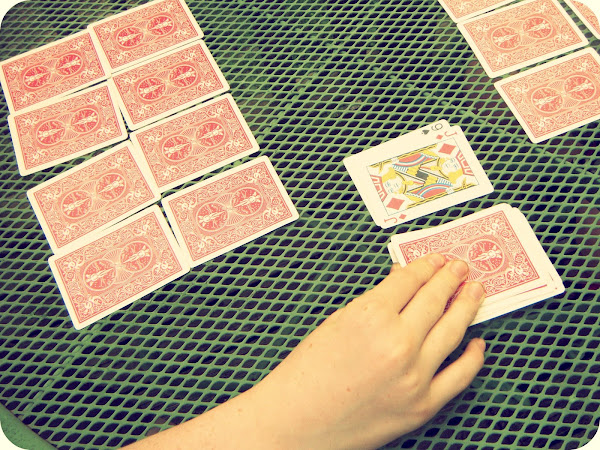 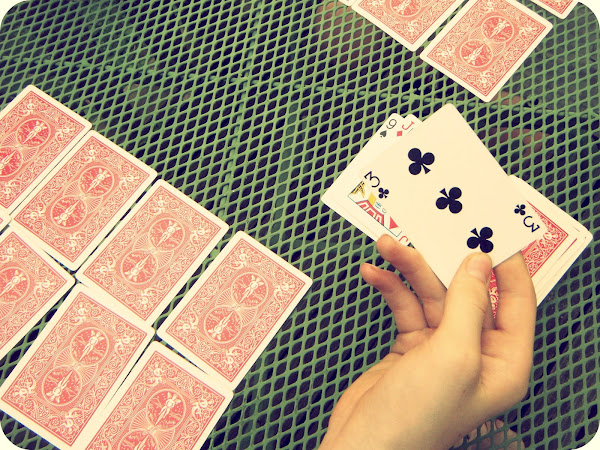 Player puts the 3 card in the 3rd spot. 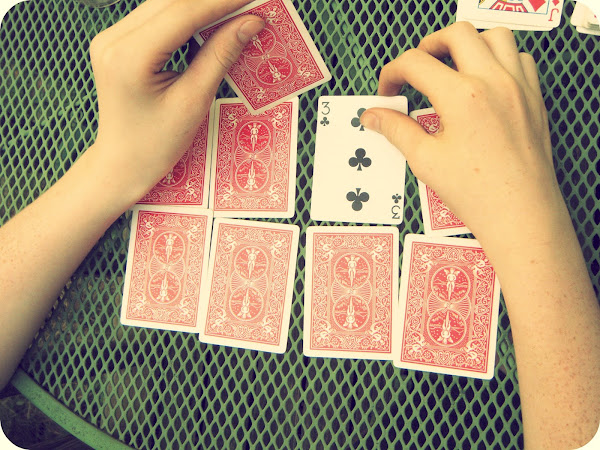 The face down card is now revealed...it is a 6. 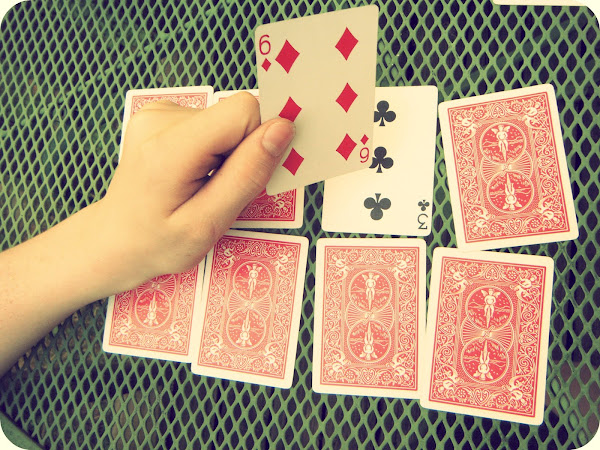 Player puts the 6 in the 6th spot.
{By the way, if you draw or reveal a card that you have already filled in a spot, you obviously can't use it again...the card is of no use to you. Discard it and your turn is over. For instance, if this player had just drew a 3...he already has the 3 spot filled...so he doesn't need it...he would have to discard and his turn would be over. He does not get to draw again.} 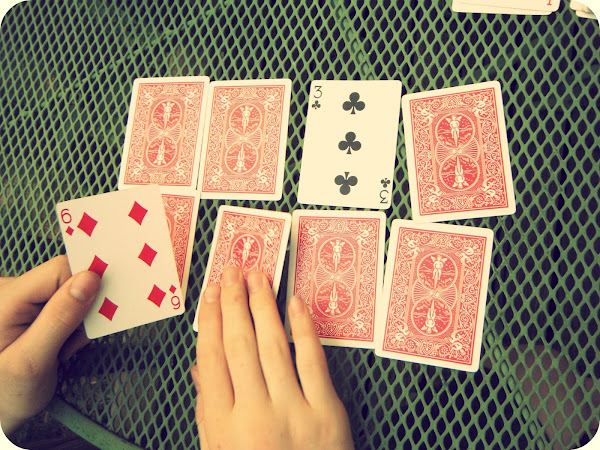 The face down card in that spot is revealed and it is a Jack. 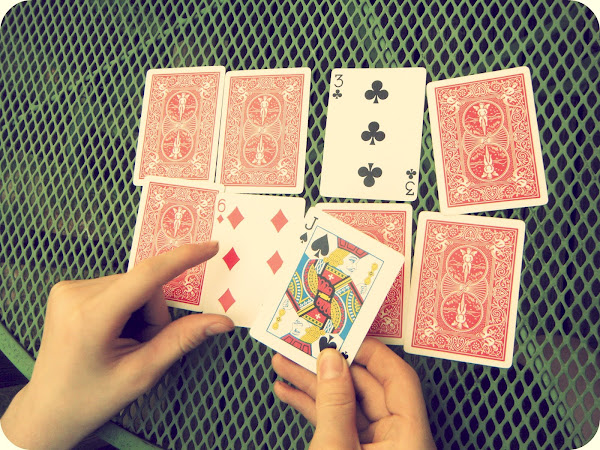 Boo! Jacks cannot be used. Player discards the Jack. His turn is now over. 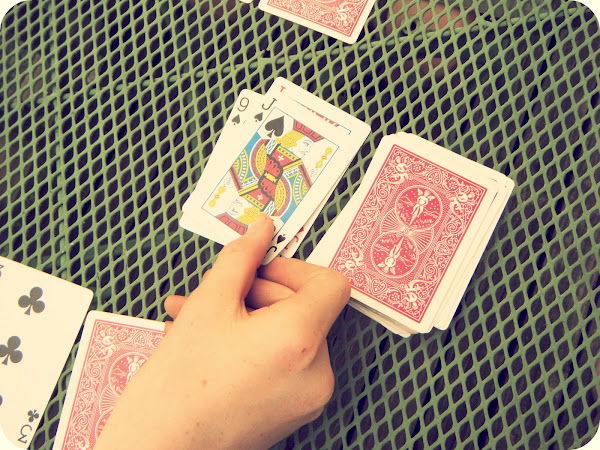 Player #2's turn. He draws from the stack since he cannot use the Jack. 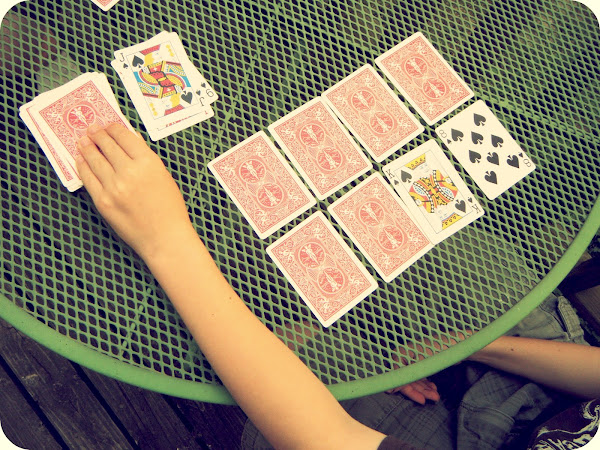 He draws a 9. The 9 cannot be used. He only needs cards Ace through 8, or another King for a wild card. 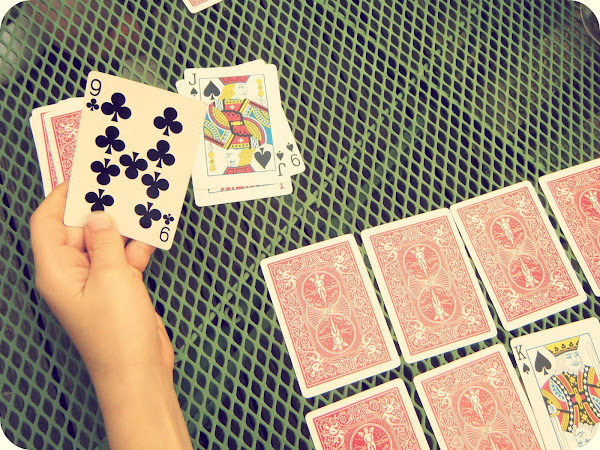 He discards the 9 since he cannot use it. His turn is now over. 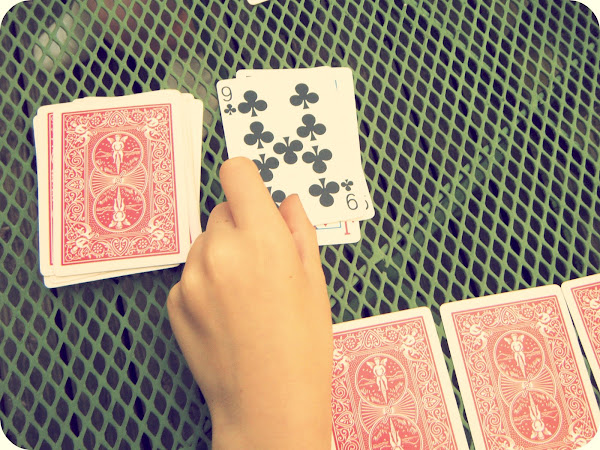 Ok, now you get the idea of how this goes. The game continues until each of your face down cards is replaced with the corresponding card using Ace through 8. Remember, Kings are wild and can go anywhere.  As long as you are picking up cards that can be placed in the correct spot, a player can keep going during his turn until he gets a card that cannot be played anywhere...then his turn is over.


If you are playing with very young children, you may want to end the game when a round is over. However, adults and older children will want to continue. Once a round is won...you shuffle the cards and re-deal...only, this time the winner of the game just played will be dealt one less card as shown  in the photo below. Now, this player will only have to fill spots Ace through 7 to win this round. 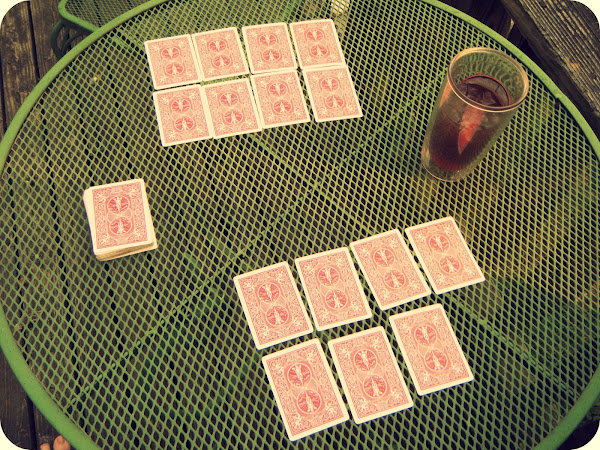 *Another thing...when a round is over and you are re-dealing the cards....any cards that have not been turned over in your hand, should remain where they are...get rid of the cards that are face up, and re-deal.

As rounds are won, players will have fewer and fewer cards....until finally, one player only has just the Ace spot to fill. Once that happens...the game is over and he is the winner. 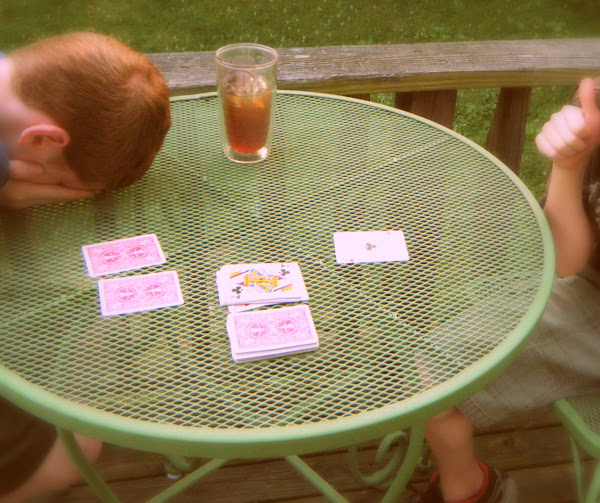 * A WORD ABOUT KINGS: As I mentioned, Kings are wild, and can be moved into any spot. If you should happen to draw a card that can go into one of the spots in your set, but you have already put a king there....you can pick up the king, put the appropriate number card in it's spot and then move the king to any other spot you wish. See below photos for example.


Here you see the King has been used in the 7 spot. 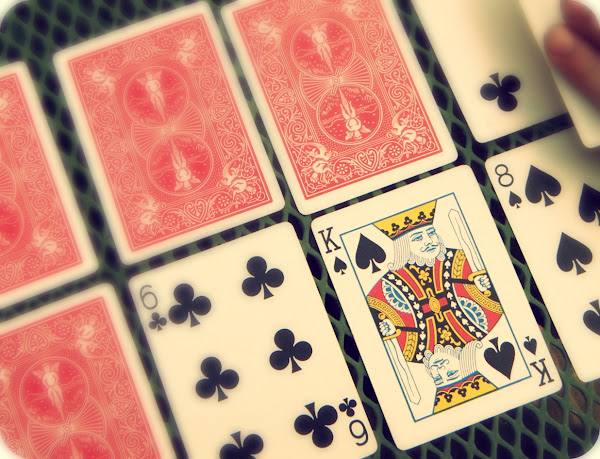 The player then drew a 7 and is able to put the 7 in the correct spot, now freeing the King to be placed in any spot the player chooses. 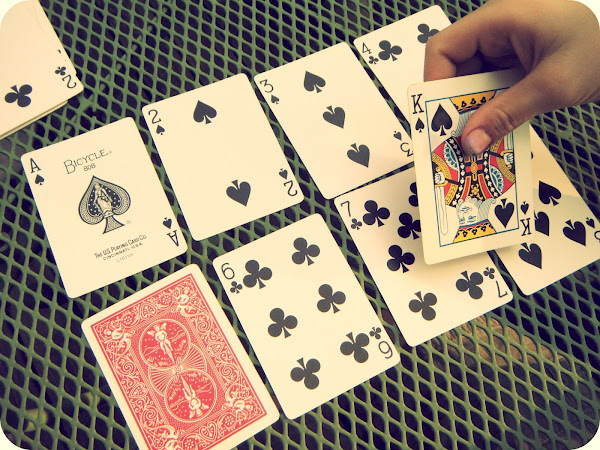 Aha! The player can use the King, wild card, in the 5 spot. 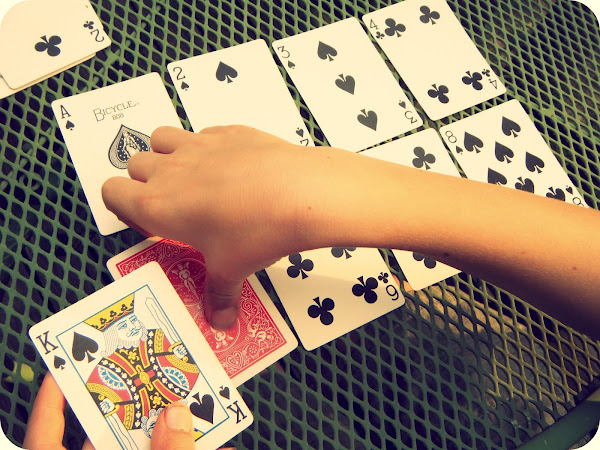 This move has won him the game!
{or "the round"} 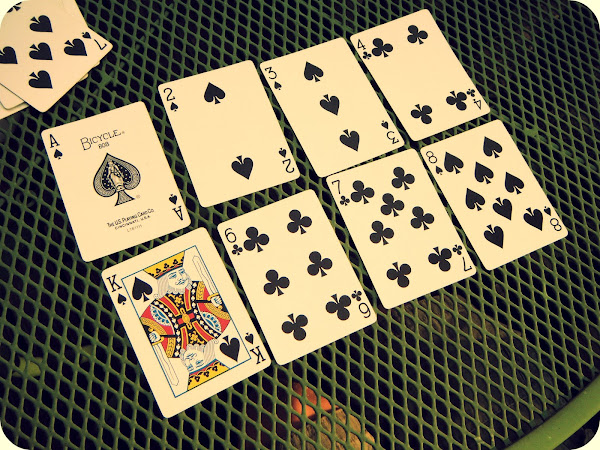 Please feel free to ask any questions...I hope I  was able to convey these instructions clearly.
Have fun!

P.S.  IT'S BEEN A  WHILE SINCE I HAVE POSTED SOME GOOD RECIPES!!
LOOK FOR MY NEXT POST OF SOMETHING DELICIOUS....VERY SOON!!
:)
Posted by Bonnie 4 comments: